r odyssey to Portland was initially a plan formed in my mind. Last week an opportunity came my way and I seized it. Somehow we had arrived safe –  not a single snakebite or case of cholera, as I had dreaded after years of playing the Oregon Trail computer game.

Portland is a city of over 60 brewpubs. It is a destination for micro brewers and enthusiasts alike. Due to my limited time I limit my visits to a few breweries. After navigating several bridges I arrived at a large industrial building bearing the logo of Hopworks Urban Brewing a.k.a. HUB.

As I saddle up to Hopworks’ eco-pub (it’s 100% renewable energy powered) I noticed a sculpture hanging over the bar made entirely of recycled bicycle parts. When I ask the bartender where the bike frames came from she tells me “even the owner dumpster dove for some. He’s really into it.” Since 2008 owner and brewmaster Christian Ettinger’s passion for sustainable energy has been evident in HUB’s use of composting and rain barrel water collection.

What I Drank: Honestly, I polished off an entire 10-beer tasting tray (see the picture below), but what shone for me was HUB’s Crosstown Pale Ale from Portland, OR – 5.3 % ABV / 45 IBU

What I Thought: Crosstown Pale Ale is made to match spicy pub food. Earthy spices and slight hints of pineapple make this organic beer is made from 3 types of caramel malts and 24 pounds of bitter Cascade hops. This refreshing ale is a distinctive brew with inviting tropical hops that leave notes of cinnamon and banana lingering on the palate.

Not heading to Portland any time soon? Create your own Portland-inspired tasting with selections from the Co-op’s beer aisle: from HUB – Crosstown Pale Ale, Deluxe Organic Ale, Survival 7-Grain Stout & Hopworks IPA. Or try a beer from Ninkasi, Laurelwood Brewing or Bridgeport. There’s just so many to choose from – stop by to savor the selection! 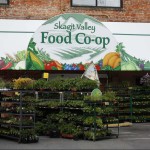 Our marketing and outreach team has news to share with you! Each week, we bring forth new FRESH DEALS, features, recipes, the Produce Report, and more!